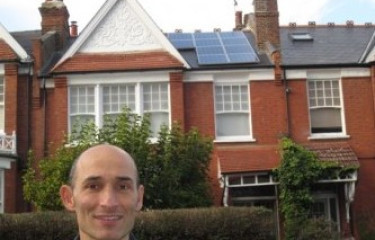 We purchased this terraced Edwardian property in 2011. We sold our own house quite quickly and were renting and looking for a new house to do up as a project. We liked this property because it’s an original Edwardian house with all the original Edwardian features. It had been empty for a while and before that had been lived in by a family for 60 years where nothing had been done to it. This meant it was a totally blank canvas for us to work on but also meant that the house had a hole in the roof, no insulation in the loft, economy seven wall heaters and no gas supply.  It was a bit of a scary proposition to take on because there was a lot of uncertainty around what we would be able to do to the house and we were limited by our budget.

We decided to stay renting and not move into the house until the main refurbishments were completed.  This meant the job was done quicker and therefore more cheaply – although you do have to balance up paying a mortgage and renting simultaneously.

What really helped us was that we had a green audit done by Make My Home Green, right at the beginning of the works – because obviously at the beginning there is an overwhelming amount of things to do. So we got them in to do an audit and look at where we could target our money to get the maximum returns in terms of the environmental improvements. They identified the heating, the wood burning stoves and the internal wall insulation.

We’ve got a central heating system in the house. This includes an efficient condensing gas boiler and a high performance heating system. We made sure this had all the energy efficient details. We got the boiler through a local sustainability group that is able to bulk buy and arrange certain deals for people locally. We’ve also put foil at the back of the radiators. We also put in two wood burning stoves and had all the internal walls on the front and the back of the house insulated. Because the floors were coming up for laying down piping for the central heating, we insulated under the floors as well. We have insulated heavily in the loft and got solar panels on the roof and used some organic paints.

Along with the energy saving measures we installed in the house we also had to do some pretty fundamental stuff like redoing the kitchen, putting in 2 bathrooms, adding an extension and sorting out the roof.